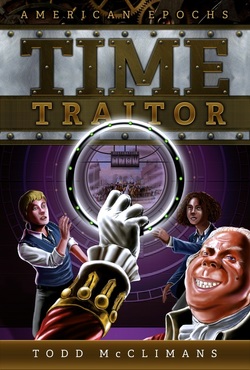 Have you ever wished you could go back in time?  Where would you go?  What would you see?  What if you had the power to alter history, to manipulate events and make yourself rich, famous, or powerful?

To Kristi Connors, history is nothing but a bunch of crusty old names and dusty books.  She has more important things to worry about, like tormenting her ill-tempered history teacher, Dr. Xavier Arnold, and getting herself kicked out of George Washington Prep.

Ty Jordan just wants to be left alone, to disappear into the pages of his books, far away from the pain of the death of his mother, blow-hard teachers, and the bullies who make every moment of his life at GWP miserable.

But when Kristi and Ty discover Dr. Arnold has invented a working time machine, everything changes.  To protect his secret, Arnold whisks them back into history, smack in the middle of the Revolutionary War and a conspiracy to alter the outcome of the war in favor of his infamous ancestor, General Benedict Arnold.  The two unlikely friends must escape slave catchers and skirt bloody battlefields as they track Dr. Arnold through war-torn Colonial America in hopes of somehow getting back to their own time.

Will Kristi and Ty thwart Arnold’s mad scheme to alter American history?  Will they ever make it home?

Follow Kristi and Ty on their trek through time in the first installment of the American Epochs series: TIME TRAITOR. 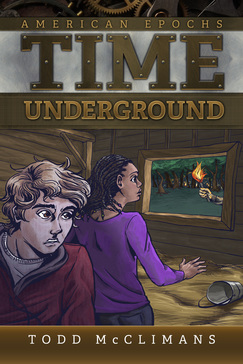 Two boys cross a fallow field on bare, calloused feet, following the North Star.  Slave catchers spread across the sleeping countryside, holding taut leashes and lanterns.  A bloodhound howls and a shotgun blast cuts the air.  The catchers converge on their prey to clamp them back into chains…

Back safely in her own time after time traveling to 1780 to spoil a scheme to destroy the American Revolution, Kristi Connors finds a history tracing her family to 1843…and discovers her ancestors were slaves! Her great-great-grandfather and his younger brother escaped from their plantation and traveled north along the Underground Railroad.  But her great-great-uncle, a boy of only eight years, was captured by slave catchers and disappeared into history.

Meanwhile, her former classmate Ty Jordan, voluntarily left behind in 1780, struggles to understand post-revolutionary America.  The people of the infant country celebrate their hard-fought freedom with balls, fairs, and crisp, new flags flying from every flagpole.  But when slave ships on the Philadelphia wharf fly the same stars and stripes, Ty wonders how “free” the country really is.

Time travel with Kristi and Ty to the American South in 1858, just three years before the slavery question boils into a bloody war.  Can they save Kristi’s grandfather and uncle and guide them safely to Canada? Or will Kristi be caught and condemned to chains? 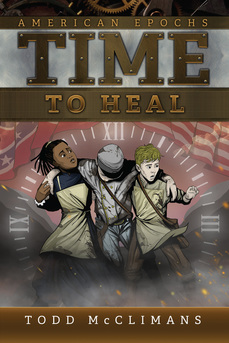 Time travel with Kristi and Ty to the battlefields and hospitals of the American Civil War in Time to Heal.

It’s bad enough Kristi has to share a room at school with her annoying stepsister. She’s also had no news from Ty, her best friend and fellow time-traveler who stayed behind in 1858 after their last trip into the past. He seems to have disappeared from history! Did he continue to work on the Underground Railroad? Did he become a surgeon? Or did something terrible happen to him amid the horror and destruction of the Civil War?  She decides he must return to the past again to find out.

Meanwhile, back in 1862, Ty volunteers at a hospital for wounded soldiers in Washington. Given the dirtiest, smelliest, most menial jobs, he works day and night to improve the wretched, filthy conditions there. When he’s finally sent to the battlefield, can he avoid the same fate as the soldiers he’s trying to help?

Kristi time-travels to Washington in 1862, but Ty has already left the hospital. She follows him to the battlefield by working as a nurse for Clara Barton. In the end, will she be able to convince Ty to leave the Battle of Antietam? Or will her best friend become a number in the history books, just one more among the over 700,000 casualties of America’s bloodiest war?

Find out in Time to Heal, Book III in the American Epochs Series.